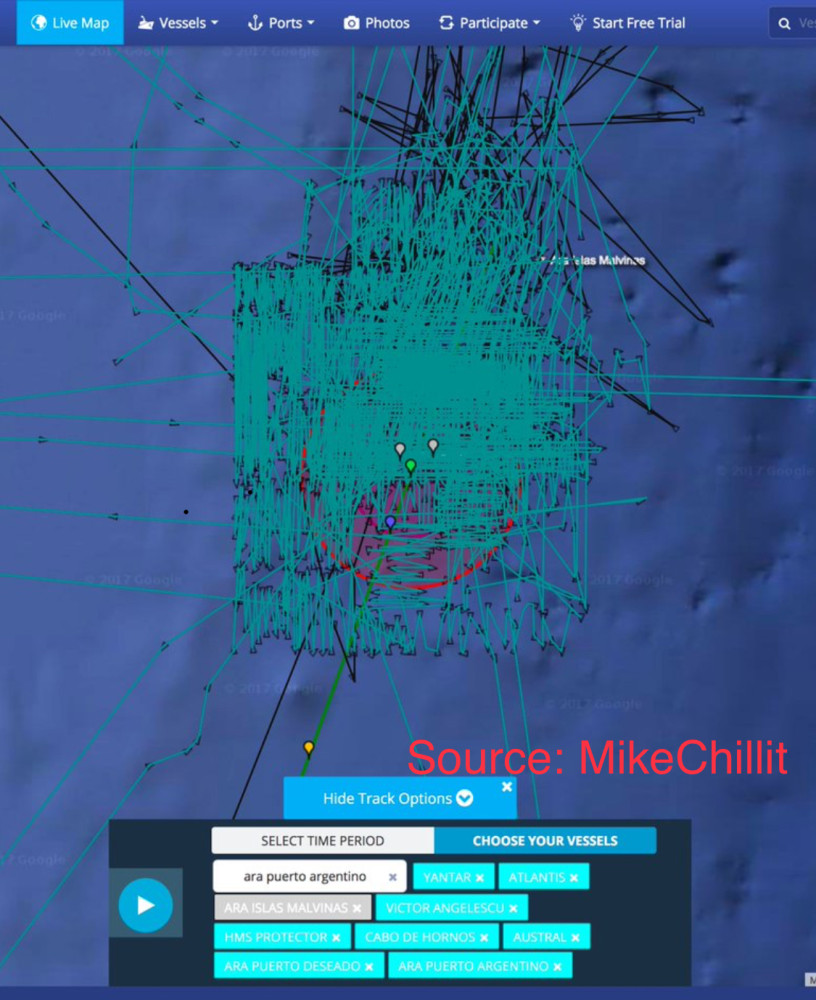 Pretty amazing legacy of the intense search, don’t think I’ve seen anything like it in my professional career. I hope that some of #ARASanJuan families are able to see this. I think we take it for granted the exhaustive work that has taken place here. Of course, to note that these are the AIS tracks of ships involved. There were other ships who weren’t on AIS, such as some of the participating Argentine Navy ships- (ARA La Argentina, ARA Robinson, ARA Sarandí, ARA Puerto Argentino at times...).

All of the seagoing US Navy teams and the WHOI research ship RV ‘Atlantis’ have terminated their search in the last week of December.

BZ to all of the multi national ship crews and aircrews!

The last search teams and ships are the:
- Russian Navy ‘Yantar’
- The Argentine Navy ARA ‘Sarandí’ and the ARA ‘Islas Malvinas’ with Russian Navy ROV teams onboard.

1 month of searching for the ARA San Juan: 15 December update.

Once the Argentine submarine, ARA San Juan, is located by the specialist ships and equipments, then robotics systems such as ROVs, will be used to investigate more closely the submarine.

The steps in locating a sunken ship:


The seabed profile of the search is complex: from a fairly flat continental shelf that drops down, with numerous ravines. 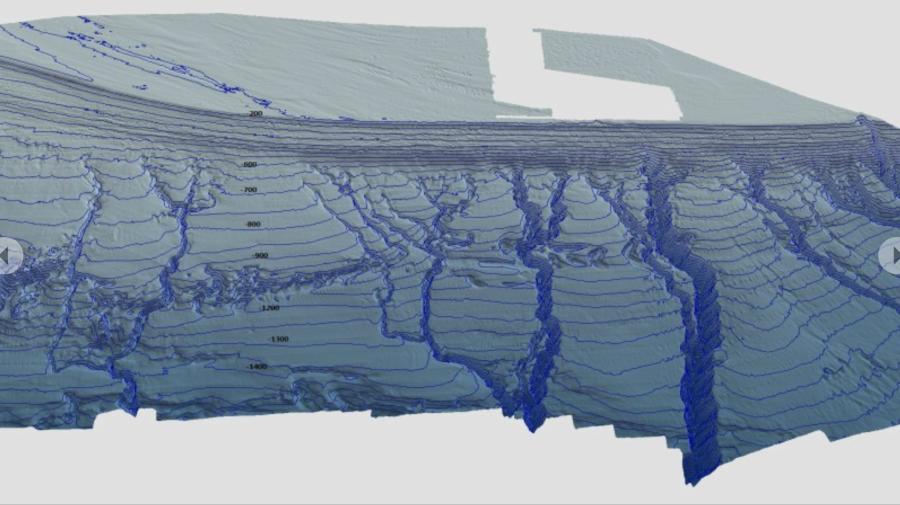 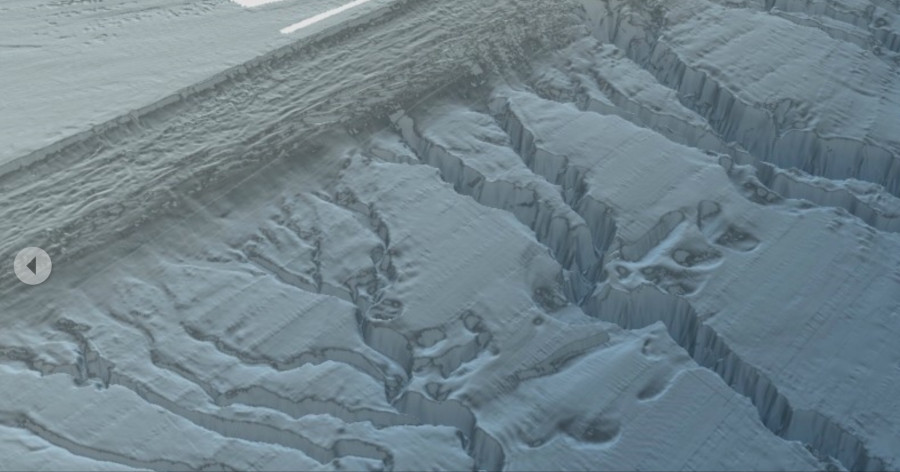 Hence you might just appreciate the complexity of the operations for locating the ARA San Juan.

Here’s a screen shot from when the Chilean Navy ‘Cabo de Hornos’ was participating in the search:https://m.youtube.com/watch?feature=youtu.be&v=VQFcWwT39uQ 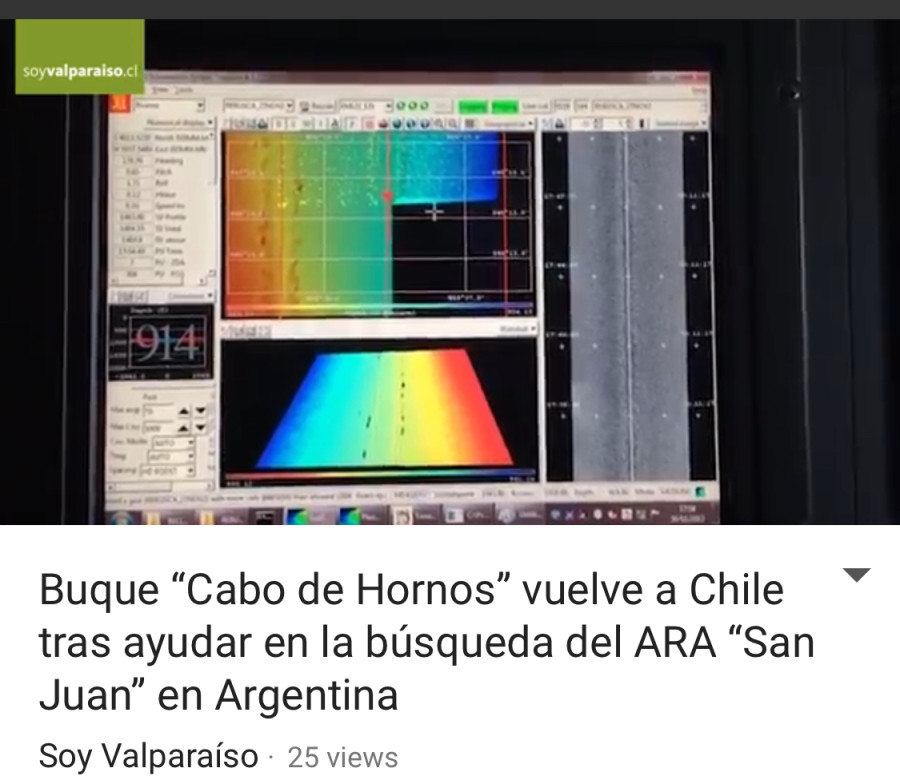 After location, then it is the turn of the tethered Remotely-operated Vehicles, (ROVs), to get a visual close-up of the submarine’s condition. The ROVs mentioned in the ARA San Juan operation, include the Russian Navy operated Saab Pantera-Plus (depth rating of 1000m) and the US Navy operated Phoenix, (BM2 Sibitzky with a depth rating of 600m), and US CURV-21 (depth rating 6000m onboard RV Atlantis). 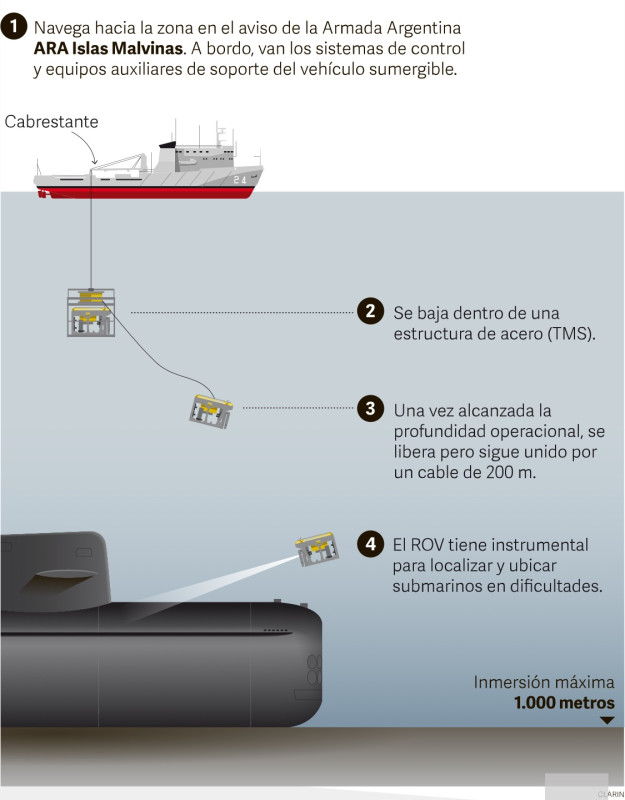 RUSSIA
Yantar
with deep-sea ROV and 2 submersibles onboard 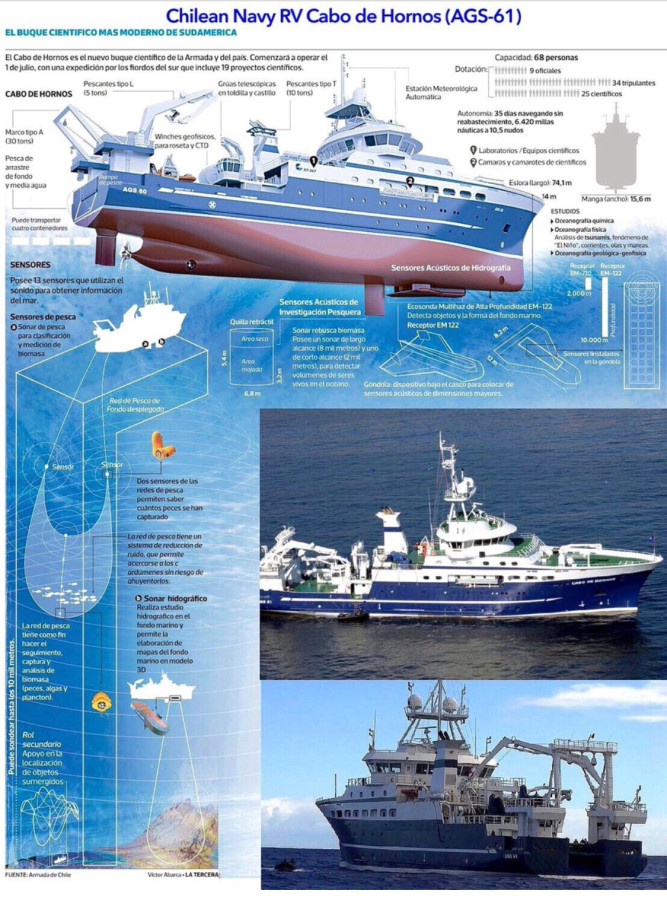 The situation as of 1 December: End of Rescue Phase

Most equipment dedicated to rescuing the crew of a stricken submarine is limited to an average of depth of around 650m or so, because this is the average limit of the fatal  crush (collapse) depth of a submarine. https://en.wikipedia.org/wiki/Submarine_depth_ratings 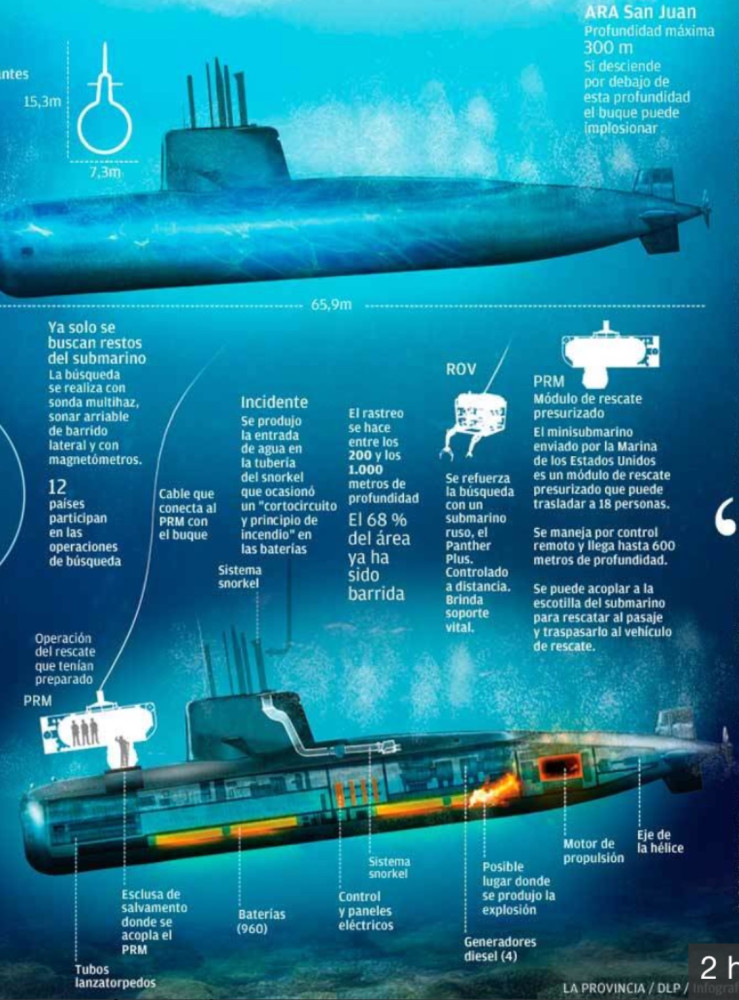 
Ships with multi-beam/ side scan sonar participating in search; (27 Nov).

This is an unprecedented international effort of great magnitude for a loss submarine:

Side scan images have appeared on the 1 Dec press briefing given by the Argentine Navy.  The images are of 2 vessels, one a Chinese fishing boat sunk in 2000, the other unknown & uncharted of another fishing boat (?)

The Russian Navy operated ROV is onboard the ARA 'Islas Malvinas" and can go down to 1000m deep. 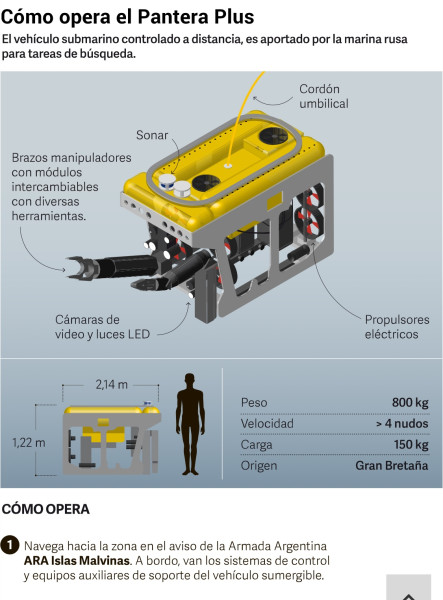 The Russian Navy,’Yantar’, is an 'oceanographic research' ship , which was recently off Angola. It was tasked with participating in the search operation area and has yet to arrive.  Additionally, the Russian navy sent by air, a specialist team, belonging to the Russian Navy's 328th expedition search and rescue unit, as well as another ROV, the Pantera Plus, (1000m depth rating),  which presumably will be loaded onboard the ARA 'Islas Malvinas’ later in the week. 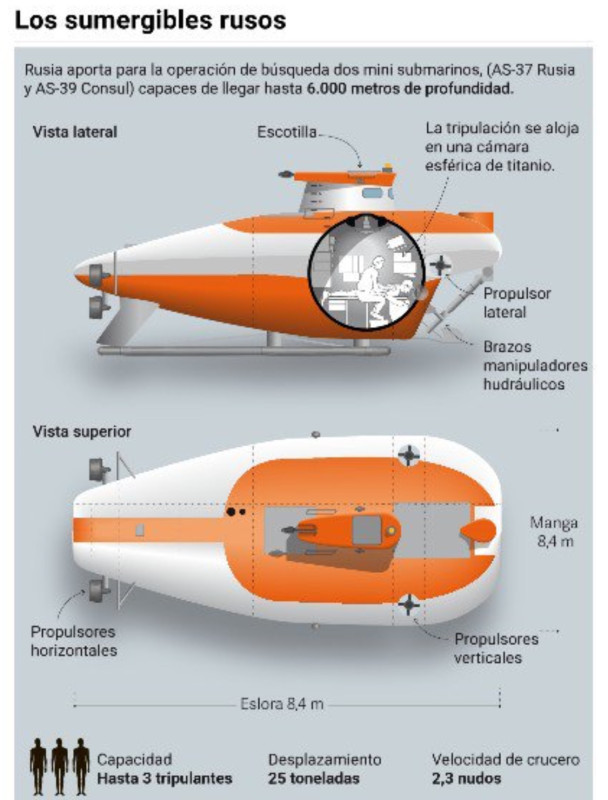 Both min-subs are equipped with two heavy-duty robotic arms, capable of handling up to 200 kg loads, and are able to carry and control ROVs. They have an operational endurance of around10–12 hours.

One successful recovery of a submarine is the Peruvian 'El Pacocha' in 1989, following a fatal collision and sinking the year before. 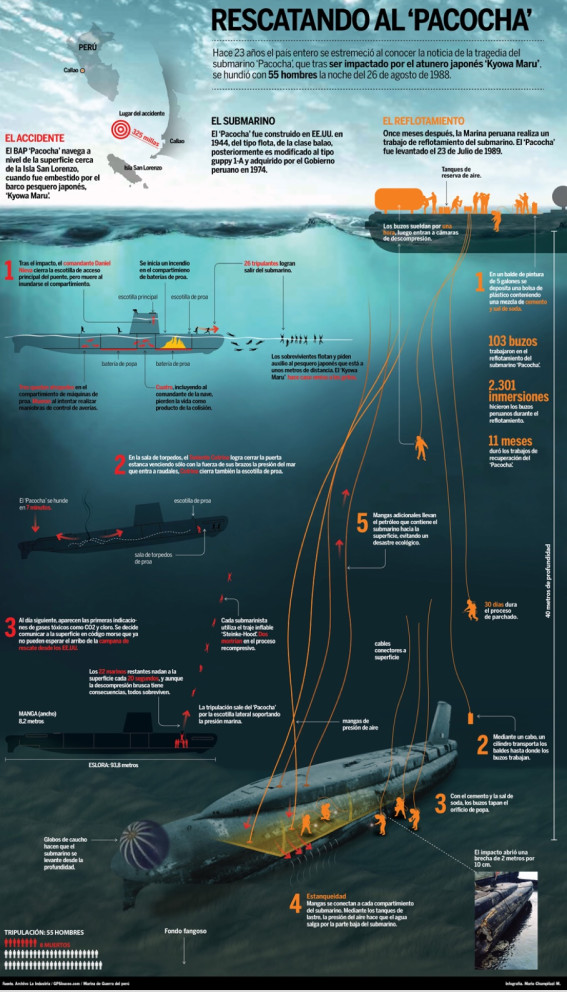 Any potential deep-sea recovery effort at is going to be extremely challenging.  Only one submarine, the Soviet nuclear submarine ‘K-129’ had been partly raised from 4.8km depth, that was part of a 6-year long top secret CIA operation codenamed ‘Project Azorian’ in 1974.


Then there is the salvage of the ‘Kursk’ submarine in 2001, where it was raised from a depth of just over 100m.  A giant Dutch operated barge with 26 cranes was used to lift it from the seabed.  This was in much shallower waters then where the San Juan has disappeared, yet very costly.


The salvage operation was done with a extremely heavy lift salvage barge and using teams of divers to assist.

One has to look at deep-sea commercial salvage operations to see the complexity and difficulty of even raising small loads, such as recovery of silver from the SS 'City of Cairo', torpedoed in 1942 in the Atlantic.